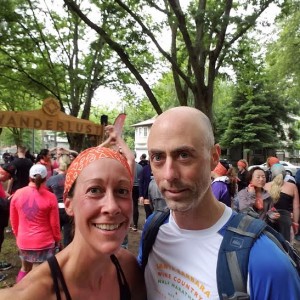 I was afraid to run. It was really hard to recognize, admit to myself, and then say out loud. Afraid to run for various reasons, physical mostly, but also just afraid of not being able to run, and how that would feel emotionally. I’ve secretly wanted to run for a long time and have quietly attempted to run on the tread mill at the gym, or when I’m walking I’ll add a little jog, but the fear kept me stuck to the earth. Self-judgement made me feel heavy and awkward. I’ve had a few moments on the tread mill where I felt buoyancy in my steps, and understood for a nanosecond what people love about running. I’ve envied the sense of freedom and accomplishment I imagine it brings.

My husband, Danny, is a runner. He loves running. He loves the sense of community, the camaraderie, he gets out of his mind when he runs and finds clarity in his being. This is what I feel like when I practice Yoga and Nia. Danny suggested that we sign up for Wanderlust 108, a mindfulness triathlon. We both committed to stepping out of our comfort zones to do something different together. The day started with a 5k, MC Yogi kicked off the event with a blessing for our hearts to be filled with peace and gratitude as we moved as a community through the streets of Sacramento. Post run, after a little break, we settled onto our Yoga mats surrounded by Yogi’s of all ages, and MC Yogi led the group in a warm-up dance and Yoga practice. The final stage of the mindfulness triathlon was a 30 minute meditation led by Vinnie Ferraro from Dharma Punx.

As the event day approached, the 5k would pop into my mind every now and then, a little voice of concern. Would I walk? Would I run? Would I skip it? Not literally skip, but just not do that segment of the event? The day of the event, as we stood with the Wanderlust 108 tribe, arms linked in a collective blessing, I nervously admitted to myself that I wanted to run. Phew, that was scary. How would I run? My mind started to calmly process how I would run. I knew lifting my knees high would be important to clear the ground with my left foot. I knew that I wanted to feel light and buoyant. I knew that I wanted to run it. Danny and I wished each other a fun 5k; we’d see each other at the finish line.

The pack began to move. Danny comfortable running in a large group wove his way to the front. I moved with the larger field of runners, making our way through the starting point, bouncing on the balls of my feet as I started to jog. We hit the pavement and I found my own space, my rhythm, and I started to feel a bit of freedom in my movement. My legs feeling comfortable as they pumped up and down, my hands loose as my elbows swung back and forth, my breath easy and comfortable. Simultaneously a sensation of elation and calm filling my heart as I realized I was running!

Gentle thoughts moved through my mind, keeping my breathing easy, committing to keeping my legs moving, my shoulders relaxed and attention focused as I ran alongside people keeping pace as my body allowed. Moving in my body’s way without judgement or fear, and responding to the sensations in my body making minor adjustments as I settled into my stride.

Not knowing the course, I had no idea how much longer I had to run, so I quietly called on my breath and enjoyed the energy of running in community. Amazed by the desire to just keep running, the image of Forest Gump flitted through my mind.  We came to a small downhill and the desire to run wildly down the hill, like a 5 year old girl, feeling the freedom of going super-fast filled me. I kept that image in my mind as I continued my mindful pace, movement as meditation. This is what I teach in Nia and Yoga, linking breath to movement, remaining fully present with one’s body and at the same time responsive to and aware of your surroundings.

And suddenly the finish line was in sight. I couldn’t suppress the smile leaping to my lips and my heart. I had run a 5k! I had run a 5k and enjoyed it, A LOT. I was so excited, so proud, so happy that I admitted to myself that I wanted to run and then committed to doing it. Committed to taking it one step at a time, using all of the resources and knowledge I had within myself at that moment, and then stepped in.

Post mindfulness triathlon, I realized that in recognizing and admitting that I was afraid, it allowed me to acknowledge the emotions surrounding the fear, offering more compassion and understanding to myself, so that when I stepped into the commitment, I was gentler with myself, fully present, and responsive. Acknowledging the fear allowed me to release it and truly be, it changed my perspective and provided another opportunity for expansion.